This report analyses the results of our audits of the Premier and Cabinet cluster agencies for the year ended 30 June 2021.

As there are no outstanding matters relating to audits in the Premier and Cabinet cluster impacting the Total State Sector Accounts we have decided to break with normal practice and table this cluster report ahead of the ‘Report on State Finances’.

What the report is about

The results of the Premier and Cabinet cluster (the cluster) agencies' financial statement audits for the year ended 30 June 2021.

Unmodified audit opinions were issued for all Premier and Cabinet cluster agencies.

Eight agencies did not complete all of the mandatory early close procedures.

What the key issues were

The Premier and Cabinet cluster was impacted by three Machinery of Government (MoG) changes during 2020–21.

The changes resulted in the transfer of activities and functions in and out of the cluster and the creation of a new entity - Investment NSW.

The transferor entities continued to provide services to Investment NSW subsequent to 30 June 2021. There were no formal service level agreements in place for the provision of these services.

The New South Wales Electoral Commission (the Commission) and Sydney Opera House Trust obtained letters of financial support from their relevant Minister and/or NSW Treasury in 2020–21. The postponement of local government elections impacted the Commission's operations due to increased planned expenditure to support a COVID-safe election. Sydney Opera House Trust's ability to generate revenue was impacted due to the closure of the Concert Hall partly due to COVID-19 and planned renovations.

The number of repeated audit issues raised with management and those charged with governance increased from 22 in 2019–20 to 24 in 2020–21.

There were 47 moderate risk and 28 low risk findings identified. Of the total findings there were 24 repeat issues.

Investment NSW should ensure services received from other agencies are governed by service level agreements.

This report provides Parliament and other users of the Premier and Cabinet’s financial statements with the results of our audits, our observations, analysis, conclusions and recommendations in the following areas:

1.1 Snapshot of the cluster 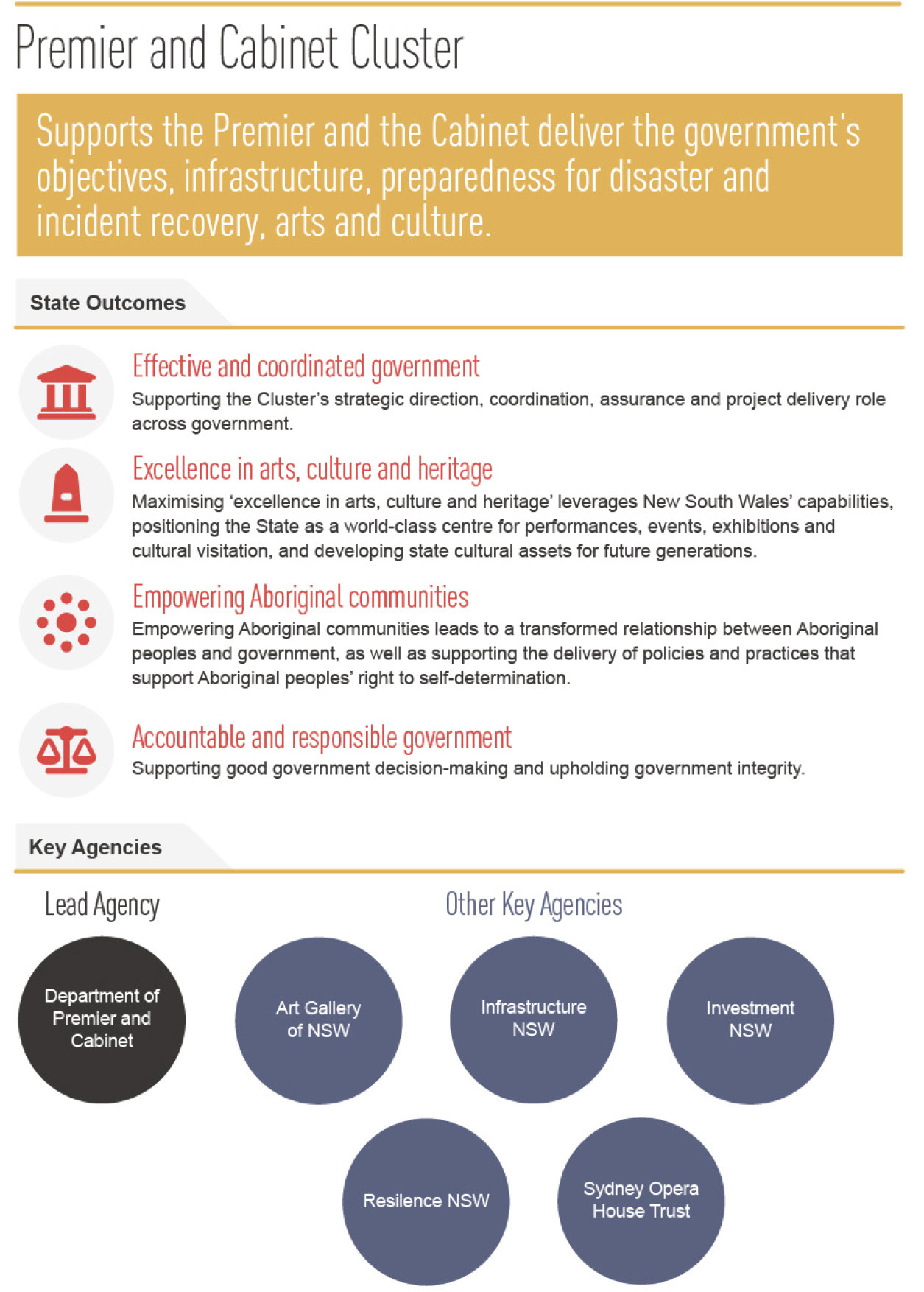 1.2 Changes to the cluster

These changes were implemented through the following Administrative Changes Orders:

Our performance audit report 'Machinery of Government changes' is expected to consider issues associated with MoG changes, including whether they achieved their effectiveness and efficiency goals and improved public sector administration. The report is scheduled to be published this month.

On the 11 December 2020, Schedule 1 of Statue Law (Miscellaneous Provisions) Act 2020 altered the name of Western City and Aerotropolis Authority and its staff agency to Western Parkland City Authority. It did not affect the Authority's structure or financial reporting requirements.

This chapter outlines our audit observations related to the financial reporting of agencies in the Premier and Cabinet cluster (the cluster) for 2021.

Audits are ongoing for:

The number of identified monetary misstatements decreased in 2020–21

The table below shows the number and quantum of monetary misstatements for the past two years.

Refer to Appendix one for details of corrected and uncorrected monetary misstatements by agency.

Of the 28 corrected misstatements, one had a gross value of greater than $5.0 million and related to a prior period error. The Library Council of New South Wales corrected a prior period error of $325 million. In 2017, the council split its collection assets into six asset classes, but not the related asset revaluation reserves. To correct this error, some revaluation decrements previously recognised in asset revaluation reserves were reclassified to accumulated funds.

Thirteen agencies were exempted from financial reporting in 2020–21

Part 3A Division 2 of the Government Sector Finance Regulation 2018 (GSF Regulation) prescribes certain kinds of GSF agencies not to be a reporting GSF agency. For 2020–21, the following cluster agencies have assessed and determined they met the reporting exemption criteria under the GSF Regulation, and therefore were not required to prepare annual financial statements:

In 2019–20, the above staff agencies were also exempt from financial reporting under Schedule 2 of the Public Finance and Audit Regulation 2015.

NSW Treasury prescribes certain mandatory early close procedures to improve the quality and timeliness of agency year-end financial statements. In March 2021, NSW Treasury reissued Treasurer’s Direction TD19-02 ‘Mandatory Early Close as at 31 March each year’ (TD19-02) and released TPP21-01 ‘Agency Direction for the 2020–21 Mandatory Early Close’. These pronouncements require the GSF agencies listed in Appendix A of TD19-02 to perform the mandatory early close procedures and provide the outcomes to the audit team by 26 April 2021.

The table below summarises the agencies' completion of the 16 mandatory early close procedures, noting that some procedures are not relevant to all agencies. The 16 procedures are listed at Appendix two.

Agencies can improve their completion of early close procedures

The following agencies did not perform all required procedures.

The review of agencies' early close procedures found more work needs to be done to:

Due to the COVID-19 pandemic, NSW Treasury extended the year-end financial reporting deadline for agencies listed in Appendix A of Treasury Direction TD21-02 'Mandatory Annual Returns to Treasury' (TD21-02) to 2 August 2021.

During May and June 2021, NSW Treasury issued a suite of Treasurer's Directions, Treasury Circular and policy papers for 2020–21 financial reporting requirements and timetables:

Financial statements were submitted on time for all cluster agencies

On 1 July 2021, the Public Finance and Audit Act 1983 (PF&A Act) was renamed the Government Sector Audit Act 1983 (GSA Act). Whilst the PF&A Act required the Auditor-General to audit agencies' financial statements within ten weeks of their receipt, the GSA Act does not specify the statutory deadline for issuing the audit reports.

The table in Appendix three shows the timeliness of the year-end financial reporting for cluster agencies.

The COVID-19 pandemic and its consequential impacts has affected the way in which some of the cluster agencies operate. The New South Wales Electoral Commission (the Commission) and Sydney Opera House Trust obtained letters of financial support from their relevant Minister and/ or NSW Treasury.

The Commission was impacted by the postponement of the local government elections to 4 December 2021. This deferral impacted the Commission's operations due to increased planned expenditure to support a COVID-safe election. The Sydney Opera House Trust's ability to generate revenue was impacted due to the closure of the Concert Hall, partly due to COVID-19 and planned renovations.

While not requiring a letter of financial support, Greater Sydney Commission continued to report negative equity of $2.7 million in 2020–21 ($1.6 million in 2019–20). The negative equity is primarily due to timing differences, as accrued expenditure in 2016–17 was not funded by grant revenue from DPC. Future financial support of $25.5 million is provided to Greater Sydney Commission in the 2021–22 NSW Budget Papers.

The Library Council of New South Wales (the Council) and Infrastructure NSW reported the retrospective correction of prior period errors.

In 2017, the Council split its collection assets into six asset classes, but not the related asset revaluation reserves. Until 2020–21, revaluation adjustments were made against the total collection asset reserve balance. When the reserves were split into classes, it was identified that two of the asset class reserves did not have sufficient surplus to offset the revaluation decrements posted since 2017. This resulted in a $325 million prior period error.

Both agencies corrected the misstatements retrospectively in accordance with AASB 108 'Accounting Policies, Changes in Accounting Estimates and Errors'.

Department of Premier and Cabinet

The Department of Premier and Cabinet (DPC) leads the NSW public sector to deliver on the NSW Government's commitments and priorities. DPC supports the NSW Premier and Ministers by coordinating the initiatives of Ministers and their agencies, managing the passage of government legislation, supporting the delivery of major projects and planning significant state events.

Investment NSW is a new central agency created on 29 March 2021 by bringing together all of the NSW Government’s economic development and attraction activities into the one place, allowing the entity to leverage the state’s successful COVID-19 response to drive local and international investment and create jobs for NSW.

The Art Gallery of NSW Trust (the Trust) is one of Australia’s flagship art museums and the state’s leading visual arts institution. The Art Gallery serves as a centre of excellence for the collection, preservation, documentation, interpretation and display of Australian and international art, and a forum of scholarship, art education and the exchange of ideas.

Sydney Opera House operates as one of the State’s cultural institutions within the Arts portfolio. It provides a broad range of cultural, tourism, community and commercial experiences to people from Sydney, NSW Australia and around the world.

Resilience NSW leads government disaster and emergency efforts from prevention to recovery by ensuring communities devastated by drought, bushfires, floods and COVID-19 get the help they need to rebuild and recover.

Appropriate financial controls help ensure the efficient and effective use of resources and administration of agency policies. They are essential for quality and timely decision making.

This chapter outlines our observations and insights from our financial statement audits of agencies in the Premier and Cabinet cluster.

Thirty-two per cent of all issues were repeat issues

Breakdowns and weaknesses in internal controls increase the risk of fraud and error. Deficiencies in internal controls, matters of governance interest and unresolved issues were reported to management and those charged with governance of agencies. The Audit Office does this through management letters, which include observations, related implications, recommendations and risk ratings.

The most common repeat issues related to weaknesses in governance and oversight, excessive annual leave and information technology.

The table below describes the common issues identified across the cluster by category and risk rating.

The number of moderate risk findings increased from prior year

The Jobs for NSW Fund (Jobs Fund) was established as a Special Deposits Account under the Jobs for NSW Act 2015 (the Act). The Jobs Fund, was previously administered by NSW Treasury during 2019–20. On 29 March 2021, the Administrative Arrangements (Administrative Changes – Miscellaneous) Order 2021, transferred the Jobs Fund to the Premier and Cabinet cluster.

The 2020–21 Jobs Fund audit is ongoing, with draft financial statements provided on the 25 October 2021.

The Premier and Cabinet cluster was subject to Machinery of Government (MoG) changes during 2020–21. These changes had an administrative impact on the cluster agencies. The changes resulted in transfer of activities and functions in and out of the cluster and the creation of a new entity (Investment NSW).

A number of activities and functions were transferred on 29 March 2021 from NSW Treasury, Department of Premier and Cabinet (DPC), Department of Planning, Industry and Environment (DPIE) and Department of Education to Investment NSW. On 29 March 2021, the Secretary of DPC confirmed in writing that DPC, DPIE and Treasury would initially provide corporate services to their former staff when they transferred into Investment NSW (and other impacted entities), and that an agreement would be developed by 30 June 2021 to formalise the arrangements. There were no formal service level agreements to 30 June 2021, which increased the risk of unclear responsibilities and accountabilities for deliverables.

Investment NSW should ensure services received from other agencies are governed by service level agreements.

Purchase and recognition of land

On 6 September 2021 (after the 30 June 2021 balance date), Western Parkland City Authority (the Authority) purchased 114.9 hectares of land located at Bringelly from the Commonwealth Department of Infrastructure, Transport, Regional Development and Communications for $293 million. A portion of the land may require remediation from contamination.

The Authority plans to perform a comprehensive revaluation of this parcel of land during the 2021–22 financial year. In addition, the Authority plans to determine and quantify the cost of any remediation of contaminated land. These matters will be an area of audit focus in 2021–22.

Appendix one – Misstatements in financial statements submitted for audit